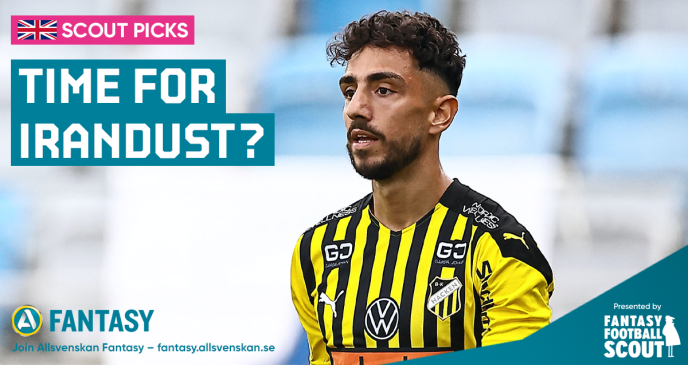 With a Stockholm derby stealing the headlines, Gameweek 14 will likely contain a bit of rotation again as Malmö FF, Hammarby, and IF Elfsborg continue their European adventures.

Peter Abrahamsson 6.4m
After a lengthy spell on the sidelines due to injury, Peter Abrahamsson is back between the sticks for Häcken, and he has started out quite well. Abrahamsson has gathered 16 points in his last 3 games courtesy of 1 clean sheet, 13 saves, and 4 defensive bonus points.

Jean Carlos de Brito 4.7m
Jean Carlos de Brito continues to look like one of the better budget alternatives in defence, with 3 assists, 2 clean sheets, 6 offensive and 13 defensive bonus points in 11 appearances. At home to Sirius in Gameweek 14, de Brito should have a good chance of racking up further bonus points, and maybe even a cheeky assist.

Eric Larsson 7.2m
It’s a tough task trying to guess what lineup will be used by Malmö every week as their European commitments continue to rage on, but for what it’s worth, Eric Larsson was a unused substitute in midweek against Rangers. Able to play in multiple slots across the defence (though predominantly deployed on the flanks), he should be in line for a start away to Halmstad. Capable of great things when given the opportunity to shine, Larsson has 26 points in his 3 last games.

Simon Strand 6.1m
Simon Strand has managed the impressive feat of gathering 4 offensive and 20 defensive bonus points in 13 games. At home to Degerfors in Gameweek 14, odds are in favour of Strand providing more points against a team moving increasingly close to circling the relegation drain.

Nahir Besara 8.6m
Nahir Besara is becoming a hot topic in the community this week as his apparent lack of set pieces is weighted against the strong potential for returns, the good fixtures against the lack of bonus points. The Scout errs on the side of the fixtures and the player himself being good enough to rack up quite a few points in the coming weeks, and if he somehow manages to wrestle some more set pieces away from Kevin Walker along the way, bonus should become more frequent as well.

Magnus Eriksson 9.5m
Much have been said about the season Magnus Eriksson is having in fantasy and in real life terms, yet the big test should come this week as Djurgården take on rivals AIK in a fierce derby. Averaging 9 points per game since the restart in GW9, Eriksson will have a big job to do this Sunday and it’s likely to show in the bonus points once more.

Tashreeq Matthews 5.2m
Tashreeq Matthews is in red hot form, having delivered 3 goals, 2 assists, 2 offensive and 2 defensive bonus points in his 5 last games. Faced with a defensively frail Sirius side who tends to rely on their attack, Matthews and Varberg should be able to find spaces to exploit.

Daleho Irandust 8.9
Slowly working his way back from injury, Daleho Irandust should be fit enough to get a decent amount of minutes at home to Östersund. Östersund will be missing key defender Noah Sonko Sundberg through suspension and Häcken have won 3 of the last 5 games since Per-Mathias Högmo was appointed the new head coach. Irandust has potential, now he needs to show he can work his way past the status of “promising talent” which he has been for a couple of years.

Deniz Hümmet 6.2m
Hardly a player in superb form, Deniz Hümmet’s inclusion this week has more to do with the fixture at home to Mjällby and the fact that he is now teaming up with Nahir Besara at Örebro. Averaging 2.9 shots a game this season, an upturn in productivity and efficiency is required if they are to stave off a relegation battle.

Samuel Adegbenro 7.8m
Samuel Adegbenro is now back to full fitness and has fired off 10 shots in the last 2 games (4 on target), resulting in 1 goal. Norrköping is looking increasingly interesting and Adegbenro should be able to get something out of the game at home to Kalmar in Gameweek 14.

Alexander Jeremejeff 9.3m
Having fallen 0.2m from his starting price, Alexander Jeremejeff’s fantasy season has arguably been somewhat of a let down so far. Not one for bonus points, Jeremejeff has still managed 6 goals and 1 assist in 12 appearances and it’s the attacking returns we are relying on at home to bottom dwellers Östersund.

Captain Pick
Every week in the Scout Picks, a captain is selected from the 11 chosen players. The Captain Pick is meant to give some guidance into who has the biggest potential for points this Gameweek and who looks relatively safe, according to the Scout.

This Gameweek the Captain Pick is Nahir Besara - who did not let us down last time around. A home fixture to Mjällby looks like a great opportunity for Besara to keep building upon his solid start to life at Örebro.